Those critiquing J.K. Rowling and other luminaries for signing off on a letter about open debate don’t seem to appreciate the extent to which threats on a few have rippled out to influence the self-censoring and fearful silence of millions.

Last month, Harper’s published an anti-cancel culture statement: A Letter on Justice and Open Debate. The letter was signed by a wide variety of writers and intellectuals, ranging from Noam Chomsky to J. K. Rowling. It was a kind of radical centrist manifesto, including major names like Jonathan Haidt and John McWhorter (two of my favorite writers) and also crossing lines to pick up folks like Matthew Yglesias (not one of my favorite writers, but I give him respect for putting his name to this letter).

The letter kicked up a storm of controversy from the left, which basically boiled down to two major contentions.

The “Profound Consequences” of Cancel Culture

The first contention was represented in pieces like this one from the Huffington Post: Don’t Fall For The ‘Cancel Culture’ Scam. In the piece, Michael Hobbes writes:

While the letter itself, published by the magazine Harper’s, doesn’t use the term, the statement represents a bleak apogee in the yearslong, increasingly contentious debate over “cancel culture.” The American left, we are told, is imposing an Orwellian set of restrictions on which views can be expressed in public. Institutions at every level are supposedly gripped by fears of social media mobs and dire professional consequences if their members express so much as a single statement of wrongthink.

This is false. Every statement of fact in the Harper’s letter is either wildly exaggerated or plainly untrue. More broadly, the controversy over “cancel culture” is a straightforward moral panic. While there are indeed real cases of ordinary Americans plucked from obscurity and harassed into unemployment, this rare, isolated phenomenon is being blown up far beyond its importance.

There is a kernel of truth to what Hobbes is saying, but it is only a kernel. Not that many ordinary Americans are getting “canceled,” and some of those who are canceled are not entirely expunged from public life. They don’t all lose their jobs.

But then, they don’t all have to lose their jobs for the rest of us to get the message, do they?

The reason he can talk about hypothetical future consequences is that he’s thinking about the wrong consequences. Hobbes appears to think that the purpose of cancel culture is to cancel lots and lots of people. If we don’t see hordes—thousands, maybe tens of thousands—of people canceled then there aren’t any “profound consequences.”

The “profound consequences” are the people—not thousands or tens of thousands but millions—who hide their beliefs and stop speaking their minds because they’re afraid.

And yes, I mean millions. Cato does polls on that topic, and they found that 58% of Americans had “political views they’re afraid to share” in 2017 and, as of just a month ago, that number has climbed to 62%.

Gee, nearly two-thirds of Americans are afraid to speak their minds. How’s that for “profound consequences”?

Obviously Cato has a viewpoint here, but other studies are finding similar results. Politico did their own poll, and while it didn’t ask about self-censoring, it did ask what Americans think about cancel culture. According to the poll, 46% think it has gone “too far” while only 10% think it has gone “not far enough.”

Moreover, these polls also reinforce something obvious: cancel culture is not just some general climate of acrimony. According to both the Cato and Politico polls, Republicans are much more likely to self-censor as a result of cancel culture (77% vs 52%)  and Democrats are much more likely to participate in the silencing (~50% of Democrats “have voiced their displeasure with a public figure on social media” vs. ~30% of Republicans).

Contrast these poll results with what Hobbes calls the “pitiful stakes” of cancel culture. He mocks low-grade intimidation like “New York Magazine published a panicked story about a guy being removed from a group email list.” Meanwhile, more than three-quarters of Republicans are afraid to be honest about their own political beliefs.

The second contention—which is that everyone has at least some speech they’d enthusiastically support canceling—is a more serious objection. After all: it’s true. All but the very most radical of free speech defenders will draw the line somewhere. If this is correct, then isn’t cancel culture just a redrawing of boundaries that have always been present?

To that, I answer: no. There really is something new and different about cancel culture, and it’s not just the speed or ferocity of its adherents.

The difference goes back to a post I wrote a few months ago about the idea of an ideological demilitarized zone. A normal, healthy person will draw a distinction between opinions they disagree with and actively oppose and opinions they disagree with that merit toleration or even consideration. That’s what I call the “demilitarized zone”: the collection of opinions that you think are wrong but also reasonable and defensible.

Cancel culture has no DMZ.

Think I’m exaggerating? This is a post from a Facebook friend (someone I know IRL) just yesterday: 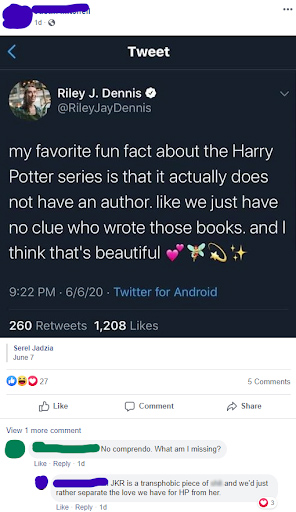 You can read the opinion of J. K. Rowling for yourself here. Agree or disagree, it is very, very hard for any reasonable person to come away thinking that Rowling has anything approaching personal animus towards anyone who is transgender for being transgender. (The kind of animus that might justify calling someone a “transphobic piece of s_ _ _” and trying to retcon her out of reality.) In the piece, she writes with empathy and compassion of the transgender community and states emphatically that, “I know transition will be a solution for some gender dysphoric people,” adding that:

Again and again I’ve been told to ‘just meet some trans people.’ I have: in addition to a few younger people, who were all adorable, I happen to know a self-described transsexual woman who’s older than I am and wonderful.

So here’s the difference between cancel culture and basically every other viewpoint on the political spectrum: in the case of the latter, people can acknowledge shades of grey and areas where reasonable people can see things differently, cancel culture can’t and won’t. Cancel culture is binary (ironically). You’re either 100% in conformity with the ideology or you’re “a —–phobic piece of s_ _ _”.

This is not incidental, by the way. Liberal traditions trace their roots back to the Enlightenment and include an assumption that truth exists as an objective category. As long as that’s the case—as long as there’s an objective reality out there—then there is a basis for discussion about it. There’s also room for mistaken beliefs about it.

Cancel culture traces its roots back to critical theory, which rejects notions of reason and objective truth and sees instead only power. It’s not the case that people are disagreeing about a mutually accessible, external reality. Instead, all we have are subjective truth claims which can be maintained—not by appeal to evidence or logic—but only through the exercise of raw power.

Liberal traditions—be they on the left or on the right–view conflict through a lens that is philosophically compatible with humility, correction, cooperation, and compromise. That’s not to say that liberal traditions actually inhabit some kind of pluralist Utopia where no one plays dirty to win. It’s not like American politics (or politics anywhere) existed in some kind of genteel Garden of Eden until critical theory showed up. But no matter how acrimonious or dirty politics got before cancel culture, there was also the potential for cross-ideological discussion. Cancel culture doesn’t even have that.

This means that, while it’s possible for other viewpoints to coexist in a pluralist society, it is not possible for cancel culture to do the same. It isn’t a different variety of the same kind of thing. It’s a new kind of thing, a totalitarian ideology that has no self-limiting principle and views any and all dissent as an existential threat because its own truth claims are rooted solely in an appeal to power. For cancel culture, being right and winning are the same thing, and every single debate is a facet of the same existential struggle

So yes, all ideologies want to cancel something else. But only cancel culture wants to cancel everything else.

Lots of responders to the Harper’s letter pointed out that the signers were generally well-off elites. It seemed silly, if not outright hypocritical, for folks like that to whine about cancel culture, right?

My perspective is rather different. As someone who’s just an average Joe with no book deals, no massive social media following, no tenure, nor anything like that: I deeply appreciate someone with J. K. Rowling’s stature trading some of her vast hoard of social capital to keep the horizons of public discourse from narrowing ever farther.

And that’s exactly why the social justice left hates her so much. They understand power, and they know how crippling it is to their cause to have someone like her demure from their rigid orthodoxy. Their concern isn’t alleviated because her dissent is gentle and reasonable. It’s worsened because it makes it even harder to cancel her and underscores just how toxic their totalitarian ideology really is.

I believe in objective reality. I believe in truth. But I’m pragmatic enough to understand that power is real, too. And when someone like J. K. Rowling uses some of her power in defense of liberalism and intellectual diversity, I feel nothing but gratitude for the help.

We who want to defend the ideals of classical liberalism know just how much we could use it. 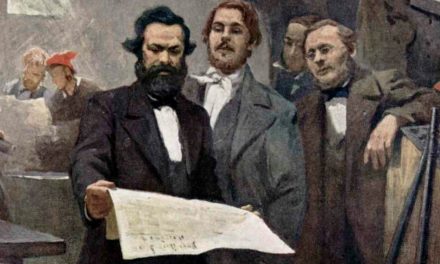 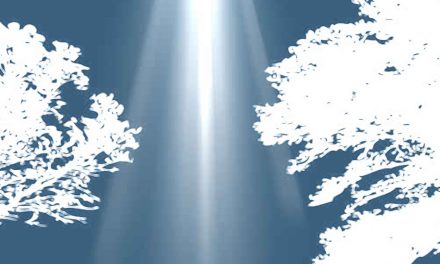