America was founded on the principle that “all men are created equal”. Despite calls to isolate or secede, this is worth saving.

Some early translators of Alexis de Tocqueville’s Democracy in America describe this country as an experiment. The principles and foundations were so radically new that this nation was not merely a new political entity, but an experiment in whether the founding ideals of this fledgling  country were sustainable.

That same question is alive and well today, as fresh questions have arisen about the American experiment.  More and more rightfully look at our national dialogue with pessimism. The division, enmity, and distrust can feel insurmountable. And it’s painfully true:  too often our nation has failed to live up to the ideals of its founding.

Some therefore conclude that the experiment has failed. That the soaring discourse and radiant principles our nation was founded on are played out. That we are too hypocritical. Too  estranged. Too apathetic. Too contentious.

We even increasingly hear loud calls for seclusion or secession based on ideology or geography.

Tablet magazine ran a piece last month suggesting that secession of the fifty states into a group more akin to the European Union was inevitable:

Future historians will mark the 2020 plague as the beginning of the end for the American “experiment” that began in 1776 and that Abraham Lincoln cemented together with steel between 1860 and 1865. . . . Surely, even the most cockeyed optimists have to admit our current structure isn’t working—and hasn’t been for a very long time.

Well call me a cockeyed optimist if you must, but I believe there is something worth saving.

The United States of America brought into reality the principles articulated by the thinkers behind the Age of Enlightenment: especially the power of reason, and the rights of humankind.

Is there a place in today’s world for a nation not just molded and influenced by those great thinkers, but built on the hope of actuating their ideals? Resoundingly yes!

Human beings have the power to improve their own lives.

At a 2010 lecture at BYU-Idaho, a student asked Terryl Givens why he chose to divide his area of study between The Church of Jesus Christ of Latter-day Saints and Romanticism.

The observation that a school of thought could be considered true has remained with me. And while I don’t share Givens’ enthusiasm for Romanticism, I have approached much of my study of literature and ideas with the same question: Is this true?

Perhaps no school of thought stands up to that test as well as the Age of Enlightenment.

Of the many ideas that categorize the age, perhaps the most important and influential stands: Human beings have the power to improve their own lives.

That observation may seem mundane in the age of DIY and self-help books, but at the time it flew in the face of millennia of collected dogma. The Augustinian idea of depravity positioned mankind as weak and incapable—something political rulers and kings were all too ready to validate. And most religious reformers merely doubled down on man’s fallen nature.

The Renaissance and the Enlightenment fueled true revolutions in the sciences, in the arts, in the commercial/industrial world, and in the political sphere. . . . These widely recognized powers contradicted traditional beliefs in humankind’s evil nature to the point that many people not only saw little practical need for God’s grace, they adopted the humanistic assumption that humans are good by nature.

The Age of Enlightenment brought us trenchant truths such as:

“Nothing in Nature stands still; everything strives and moves forward”

“Surely something resides in this heart that is not perishable, and life is more than a dream.”

“To love truth for truth’s sake is the principal part of human perfection.”

“Liberty is a gift from heaven, and every individual of the same species has the right to enjoy it.”

And of course our own American entrant: “All Men are created equal.”

The United States of America was both inspired by and built upon these ideas. For without inherent human worth, how could we survive without a benevolent divine monarch?

Without human worth, how could we hope to govern ourselves?

Without liberty and equality, toward what guiding principles could we strive?

Writing about this “big idea” at the heart of America, national dialogue leader Liz Joyner underscores the radical nature of the idea that, “regular people with no crowns on their heads could talk to each other, think for themselves, and be their own bosses.

Not only have these ideas activated America for centuries know, they have inspired other countries around the world.

To the extent that The Church of Jesus Christ of Latter-day Saints could be characterized as an “American” religion as some claim, it is because we codify in doctrine what this nation inscribes in its culture. That with God’s help, human beings are capable, and that we are worth it.

Even with human frailty and failings so evident to us in retrospect, we might well ask, did the God of Heaven look down on this American effort with approval?

For Latter-day Saints, this is more than scriptural conjecture. As a matter of canonized doctrine, we hold that Deity imbued the founding documents of this nation with the divine. They were inspired!

And why? Our scripture explains:

So we could have enough freedom to be accountable.

So that human beings would not be held in bondage one to another.

Some may call this hopelessly naive or revisionist history. But there is no hypocrisy in forthrightly recognizing failures while aspiring to the beautiful transcendent truths articulated at this nation’s founding.

Yes, this nation has oppressed. But it was not built for oppression. It was built to free the oppressed.

The principles of our founding may not have always been our compass, but many of us still believe they can be our redemption. Frederick Douglass said in response to the Dred Scott decision:

I know of no soil better adapted to the growth of reform than American soil. I know of no country where the conditions for affecting great changes in the settled order of things, for the development of right ideas of liberty and humanity, are more favorable than here in these United States. . . .  The Constitution, as well as the Declaration of Independence, and the sentiments of the founders of the Republic, give us a platform broad enough, and strong enough, to support the most comprehensive plans for the freedom and elevation of all the people of this country, without regard to color, class, or clime. There is nothing in the present aspect of the anti-slavery question which should drive us into the extravagance and nonsense of advocating a dissolution of the American Union

The Age of Enlightenment is true. It’s underlying conclusion that we are capable, we are free, and we are equal is as much a clarion call today as it was 244 years ago.

This nation built on those ideals deserves to continue its historic struggle towards making those ideals a reality.

Yes, we’re at a difficult moment in this history.  This very magazine is based on a sobering acknowledgment that our national discourse is painfully struggling. But we still need one another —maybe even now more than ever? Every rationalist needs a traditionalist. Every humanist needs a spiritualist. The fresh, challenging conversations we have fostered among our own editorial board and among our own writers give us hope that these gaps are not insurmountable —that these differences are not fatal.

So as we prepare to celebrate the signing of the very document that declared “All Men are Created Equal,” let us not fixate on how to abandon this experiment, but on how to reinvigorate it. If ever there was an idea worth saving, it’s this one.

If ever there was an idea worth saving, it’s this one. 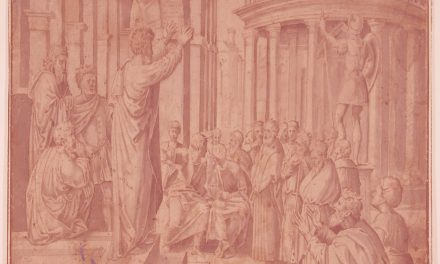 Prophets on Politics: Ten Messages to an Agitated, Aggrieved America